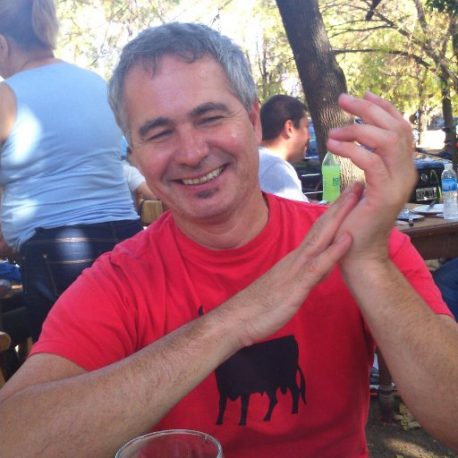 Omar was born in 1964 in the Province of La Pampa, Argentina, and currently resides in Buenos Aires. He has a degree in Literature from the University of La Pampa and a PhD in Literature from the University of Buenos Aires. He is a professor in Slavic Literature at the Faculty of Philosophy and Literature of the University of Buenos Aires, and has made the first Argentine translations directly from Russian of Crime and Punishment and The Brothers Karamazov, by Fyodor Dostoevsky, as well as the popular romances of Alexander Pushkin and the complete works of theater of Antón Chéjov (all of them edited by Colihue publishing house), among others. He is a founding member of the Argentine Dostoevsky Society, which is part of the International Dostoevsky Society. He is also a professor of Spanish Language at the National University of Lanús. He is also a writer and researcher of indigenous Pampean history. He is coordinator of the collection Paths of the Native Peoples of America, of Ediciones del Sol. In that collection, he is also the author of the books Los Mapuches (2008) and Los Selk’nam (2011). In 2011 Colihue published his novel La veranada del chachai Calfucurá, and in 2015 his compilation of the correspondence of chief Calfucurá together with other documents related to his figure and the historical period involved: Juan Calfucurá. Correspondencia. 1854-1873.