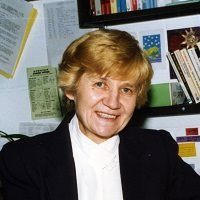 Graduated from Charles University in Prague in philosophy and subsequently obtained a PhD in psychology. Visitor of the Department of Cambridge as a post-doctoral in 1967. In 1970 she was appointed at the University of Stirling as a lecturer in social psychology. She is Emeritus Professor at the University of Stirling, Visiting Professor in the Department of Social Psychology at the London School of Economics and Political science (since 2007) and a Research Associate in the Centre for Philosophy of Natural and Social Sciences at the London School of Economic and Political Sciences (since 2011). Fellow of the British Academy, of the Royal Society of Edinburgh and of the British Psychological Society. In 2012, together with Professor Martin Bauer of the London School of Economics and Political Science she initiated a study group on common sense in social sciences. Her main interests in theoretical research are the ontology and epistemology of social psychology theory and the interdependence between social thought, dialogue and semiotics. She is a specialist in Mikhail Bakhtin and dialogism understood as a philosophical tradition from antiquity to contemporaneity.